Association of Schools of Political Studies of the Council of Europe

Established in 1992, in Moscow, the first School of Political Studies of the Council of Europe has aimed to promote the fundamental values on which the European project was founded at the end of the Second World War: democratic pluralism, human rights and the rule of law. Since then 20 other Schools have been set up along the same lines under the auspices of the Council of Europe. They now constitute a genuine Network of young politicians covering the whole of Eastern and South-Eastern Europe, the Caucasus and, since 2012, Mediterranean region and countries of the Visegrad Group.

The activities of the Council of Europe’s Schools of Political Studies are based on seminars organised in each participating country. They bring together a group of approximately 30 young politicians, elected both nationally and locally, civil servants, leaders of civil society and journalists. They all mirror each country’s social and cultural characteristics.

Themes related to the European project

Every year, all participants of the programme are invited to Strasbourg, in the Palais de l’Europe, to take part in the World Forum for Democracy which brings together 1000 participants and experts, including Heads of State and Government, representatives of European institutions and the French government, European and international academics. For several years, within the framework of co-operation with the Organisation Internationale de la Francophonie, a group of participants from French-speaking Africa is invited to participate in the event with the purpose of developing the concept of Schools of Political Studies in Western Africa. Similar School initiatives have now been established in some of these countries.

Over the last few years, as the Schools’ Network has gradually expanded, co-operation has been established between different Schools which now hold regular bilateral and regional meetings facilitating dialogue and often contributing to reconciliation in divided countries and regions.

The creation of Alumni networks to strengthen the ties developed during the different activities has been encouraged. They include many members of government and parliament, local politicians, senior officials, businessmen, journalists, NGO leaders and lawyers.

The programme is funded by the Council of Europe and the European Commission, and also benefits from contributions from member and observer States of the Council of Europe. The City of Strasbourg and other local authorities provide financial and political support to the World Forum for Democracy, as well as the French Government.

More: Association of Schools of Political Studies of the Council of Europe 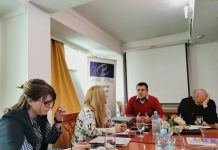