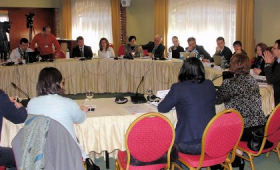 On 18 February 2015 the Center for Research and Policy Making (CRPM), in collaboration with the Center for the Study of Democracy (CSD) organized a workshop dedicated to the public institutions’ and CSOs’ role in countering tax evasion and fraud in Skopje, Macedonia. Dr. Marija Risteska, Executive Director of the Center for Research and Policy Making and Ms Ana Mickovska – Raleva, Senior Analyst at CRPM, welcomed the participants and presented the initiative for analyzing the trends and manifestations of the hidden economy in Macedonia. 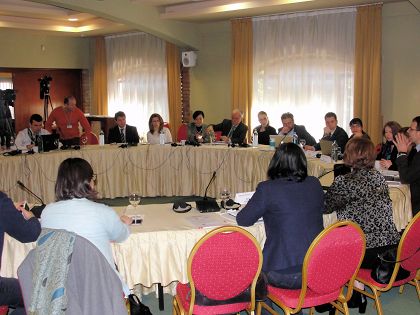 Mr. Ruslan Stefanov, Director of the Economic Program at the Center for the Study of Democracy, presented CSD’s experience in monitoring the hidden economy at national and regional level, implemented since 1998. He welcomed the stronger stance that the EU is taking on the issue and underlined that a single country cannot tackle the problem without relying on its partners. Mr. Stefanov stressed that analyzing the hidden economy is important due to three reasons: (a) it shows the overall level of efficiency of the state and the trust between society and the institutions; (b) the hidden economy affects the most vulnerable groups; and (c) not all of the hidden economy is negative and governments should not necessarily target the newly created businesses. In that respect he noted that the transition from control-based to compliance governance is a challenge for all countries in the region 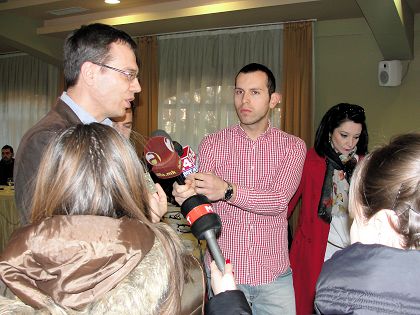 Ms Slavica Kiroska, Deputy Chief General Inspection, Public Revenue Office (PRO) underlined that the PROis historically perceived as repressive body, however it is currently working on changing its image as public organization providing high quality services and efficient collection of taxes while at the same time aiming at encouraging voluntary payment of taxes. It started to differentiate between the different types of taxpayers (good vs. bad), and to target its measures towards the key risks groups. The differentiation of risk groups is increasingly being done by utilizing special software to analyze several key parameters in order to produce top ranking lists of tax payers with increased risk of performing tax evasion and fraudulent activities. The Contact Center at the PRO provides information and consultations to taxpayers as well as manuals and brochures. The Office also collaborates with the business sector, informs it about the new rules adopted in the legislation, and trains companies to work with the new electronic systems for payment of the taxes. The electronic process has proven to be highly beneficial. It decreases the risk of human errors, saves time for collecting and analyzing tax information and identifies potential fraud risks. According to the available data, the taxes paid voluntarily increased from 77,000 in 2007 to 237,399 in 2013. The adopted electronic system contributed to a large degree for this positive result. At the moment all company taxpayers are connected electronically and similar system is being prepared for the physical persons which at the beginning will be on a voluntary basis. Ms Kiroska presented the work of the IT Forensic Laboratory, which performs financial and accounting analysis of the taxpayers, and evaluates the information from the electronic system and pointed out its increased role in the future given its technological capacities. She underlined that Macedonia has adopted the reverse charge system aiming to tackle the tax evasion and VAT fraud. In conclusion she noted that the General Tax Inspectorates prepare annual and monthly control plans, including risk indicators for all types of taxpayers. 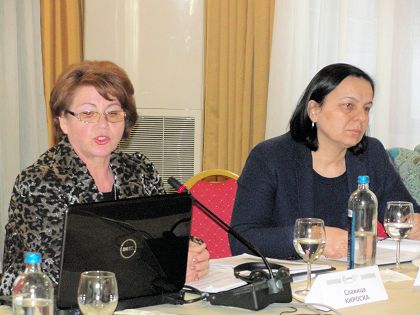 Ms Suzana Petrovska, Sector Manager at the Macedonian Financial Police presented the role of the financial police in detecting tax fraud and other forms of crime according to the provisions in the Criminal Code. The Financial Police works in the areas of money laundering, corruption, computer crimes, tax evasion, etc. Financial investigation is implemented every time when there is a criminal investigation in order to discover the source of the illegally obtained funds. The Financial Police can enforce and apply special investigation methods with the approval of the public prosecutor. The public prosecutor is in charge of the pre-trial procedure. Ms Petrovska highlighted that the Financial Police has online access to the real estate and cadaster registers, and most classified registers, which greatly facilitates its work. In accordance with the FP’s jurisdiction, she pointed out the importance of other bodies that are involved in talking tax evasion and fraud such as the PRO, the Customs Administration, the Financial Intelligence Unit etc. 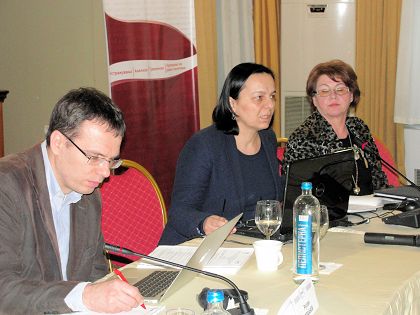 Mr. Emil Shurkov, Analyst at the Center for Research and Policy Making presented an analysis of the policies and data from a survey on the hidden economy, tax evasion and fraud in Macedonia. He stressed that these phenomena affect the most vulnerable groups such as the young unemployed, and the poor. The tax evasion is evaluated at 1 trillion Euros in 2013 or 7.9% of the EU-28 GDP. According to the survey, a third of the employed receive “envelope wages”, and more than half of the employed have “contracts with hidden clauses”. A total of 58.6% of the business respondents recommend that more effective incentives for the business are applied in order to decrease the tax evasion and 60% of the companies consider the taxes higher than they should be; 55% of the respondents declare that frequently or sometimes the companies hide their turnover and evade taxes. In 2013, 110 irregularities were detected by the financial police, totaling 11 million Euro in lost revenues. They include tax evasion, falsifying documents, money laundering, destroying business journals, abuse of positions, unlawfully privileging creditors, etc. Mr. Shurkov concluded that there are positive trends observed in the size of the collected taxes, however systematic problems persist such as not issuing of fiscal receipts, VAT manipulation and tax evasion. 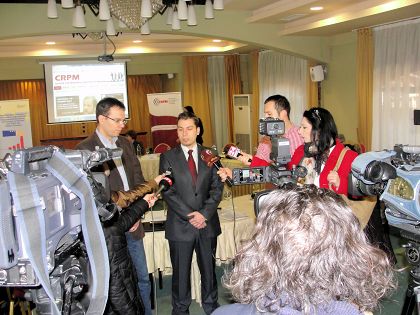 Mr. Reshat Nagavci, Head of Department at the Economic Chamber of North-West Macedonia, as a representative of the business sector, pointed out that businesses are affected by multitude of problems that affect their operations and thus their profitability. He highlighted that among those problems the most common are: frequent changes within the law, the protruding delays of VAT credit returns, the unfair competition posed by companies working, fully or partially, within the hidden economy, and the height of the financial fees and punishments that companies are subjected to by the authorities in order to achieve higher compliance. 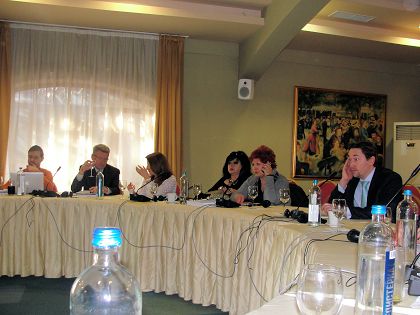 Mr. Ruslan Stefanov, Director of the Economic Program at the Center for the Study of Democracy highlighted that a major problem for the business presents the uncertainty of the legislative changes, and the quality of the service provided by the tax administration. He underlined that the administration should be able to check in 4 to 6 weeks if the return of a VAT credit contains fraud risk or not, and proceed with the payments without further delay. The tax rates are not high, however due to the fact that few people pay social securities, the Macedonian tax revenue and financial system is difficult to sustain. Moreover, he stressed the likeliness that when interviewees were describing the ‘tax burden’ while answetring questions from the population and business surveys, they actually reffered to the uncertainty the legislative changes rather than the tax rates. He recommended public oversight over the work of the tax authorities ensuring that all fraudulent companies are investigated and there is no political protection. Additionally, Mr. Stefanov points out that in order to properly evaluate the effectiveness and efficiency of public institutions efforts to takle tax evasion and froud, data provided by the institutions should go beyond the numbers of damages detected but also collection rates of those same offences after they go through the legal process. 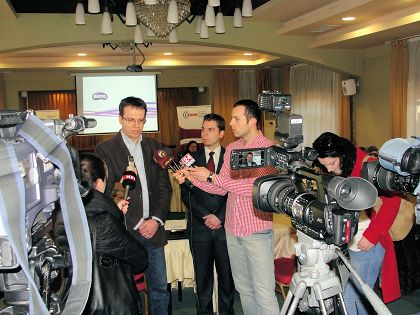 Ms Daniela Mineva, Research Fellow at the Economic Program of the Center for the Study of Democracy presented the EU initiatives in countering VAT fraud. She noted the need of speeding up the VAT refund process and the need of further increase of the excise duties. She also presented the key conclusions from the EC regular reports for Macedonia, which list as positive developments the use of electronic tax returns, the introduction of the reverse charge system, the changes in the Law on Personal Income Tax aiming at more flexibility, and the intensified inspections. 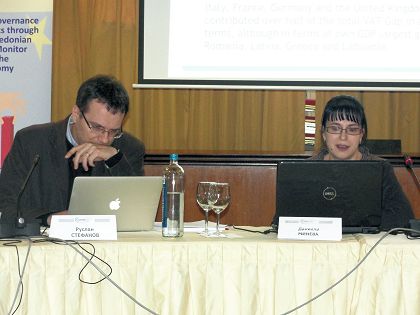 The discussion focused on the policy options for tackling the hidden economy and tax evasion. The participants underlined the necessity of social dialogue, and intensified collaboration between all stakeholders. Dr. Marija Risteska, Executive Director of the Center for Research and Policy Making concluded the discussion with the suggestion for setting up of a task force on countering the hidden economy in Macedonia, which will include the government, the employees’ organizations, trade unions and the CSOs. 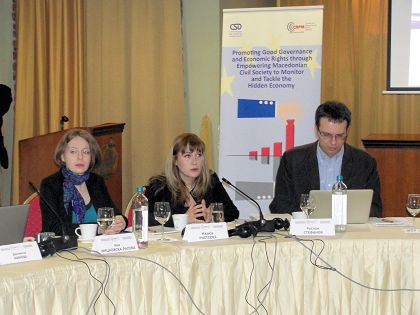