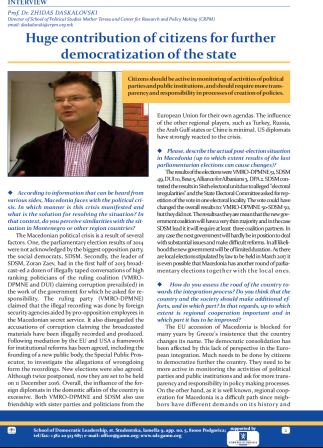 1.       According to information that can be heard from various sides, Macedonia faces with the political crisis. In which manner is this crisis manifested and what is the solution for resolving the situation? In that context, do you perceive similarities with the situation in Montenegro or other region countries?
The Macedonian political crisis is a result of several factors. One, the parliamentary election results of 2014 were not acknowledged by the biggest opposition party, the social democrats, SDSM. Secondly, the leader of SDSM, Zoran Zaev, had in the first half of 2015 broadcast-ed a dozen of illegally taped conversations of high ranking politicians of the ruling coalition (VMRO-DPMNE and DUI) claiming corruption prevails(ed) in the work of the government for which he asked for responsibility. The ruling party (VMRO-DPMNE) claimed that the illegal recording was done by foreign security agencies aided by pro-opposition employees in the Macedonian secret service. It also disregarded the accusations of corruption claiming the broadcasted materials have been illegally recorded and produced. Following mediation by the EU and USA a framework for institutional reforms has been agreed, including the founding of a new public body, the Special Public Prosecutor, to investigate the allegations of wrongdoing form the recordings. New elections were also agreed. Although twice postponed, now they are set to be held on 11 December 2016. Overall, the influence of the foreign diplomats in the domestic affairs of the country is excessive. Both VMRO-DPMNE and SDSM also use friendship with sister parties and politicians from the European Union for their own agendas. The influence of the other regional players, such as Turkey, Russia, the Arab Gulf states or Chine is minimal. US diplomats have strongly reacted to the crisis.
More… 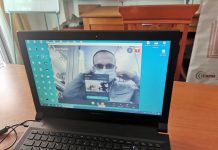 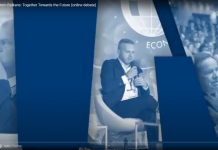